Bicycles, Transit, and the Last Mile 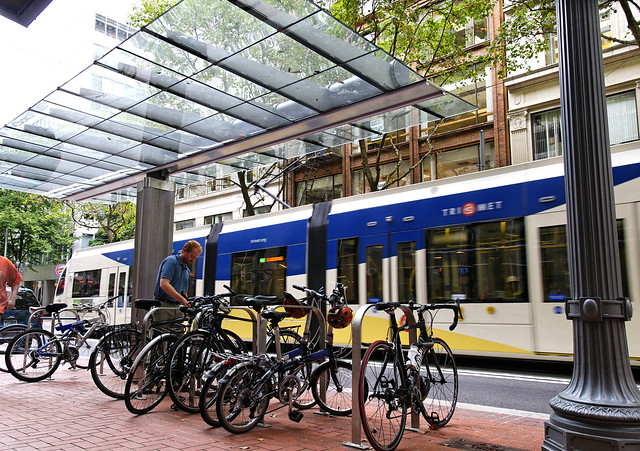 Transit agencies have a problem called the Last Mile.  It’s especially problematic in lower density communities, where convenient, high frequency local feeder bus, light rail, and trolley lines are unlikely to be economically viable.  Many US communities have this problem.  The most common solution is the Park-n-Ride — a gigantic surface lot or parking structure adjacent to a regional mass transit line.  People drive their cars a few of miles and park them all day — usually at very low cost to the driver, and often for free (though of course, parking isn’t actually free).  There are lots of problems with this model.  Parking lots take up a lot of space.  Structures are very expensive ($10k-$25k per parking spot).  What do you do when you get where you’re going?  If the transit line doesn’t come within easy walking distance (500 meters?) of your ultimate destination, this model probably isn’t attractive.  It also assumes that you’re going to own or have access to a car, even though you’re taking transit, which precludes you from reaping most of the economic benefits of not driving, as they only accrue when you get rid of the car completely.

I bring the Last Mile problem up because I just came across a study entitled Bicycling Access and Egress to Transit: Informing the Possibilities.  Combining bicycles and transit instead of cars and transit can help with a lot of the above issues.  The cost per bike parking space is at most a couple of hundred dollars, not $10,000 or more, and for a given area, you can park ten times as may bikes as cars, making a bicycle park-n-ride much more economical in both dollars and space.  It’s also possible to take at least a few bicycles along on transit vehicles, which can solve the problem of getting to one’s final destination on the other end, though not generally for everyone since bicycle capacity tends to be limited, especially on buses.

I was disappointed to see that the study only looks at cities in the US, since I think the best examples of using bikes to solve this transit problem are almost certainly in northern Europe and Japan.  I don’t know why we’re so opposed to learning from others.  The authors are of the opinion that the issue hasn’t really been looked at seriously overseas, which I find a little hard to believe, given the vast numbers of bikes being parked at train stations all over the Netherlands, Denmark, Switzerland, Sweden, Germany, Japan, etc.

I was, however, happy to see that one of the US cities included in the study was Denver/Boulder, along with Chicago, IL; Portland, OR; Santa Clara County (San Jose, CA); and Ithaca, NY.

They set out first to try and create a metric describing the potential for creating Cycle-Transit-Users (CTUs) along a given transit line, based on various available data about the region (demographic, geographic, etc).  As it turned out, this was only possible because RTD here in Denver/Boulder went to the trouble of collecting data about how often bikes are loaded or unloaded from their buses, system-wide.  It was the only transit agency to have any such data (way to go, RTD!).  Using this inferred CTU index, they then looked at transit lines in the other communities, and tried to estimate the potential for increasing transit utilization by improving facilities for bikes.  The validity of the CTU index remains to be seen.  It’ll be interesting to look at the results if Portland (which had the most fertile lines for potential CTU generation) actively tries to get more cyclists using transit in the areas recommended by this study.

They also did some focus groups with “experienced CTUs” in each of the communities.  These were overwhelmingly middle-aged male cyclists, which are, unfortunately, kind of representative of the current cycling population in the US.  They presented four possible bike/transit integration strategies: 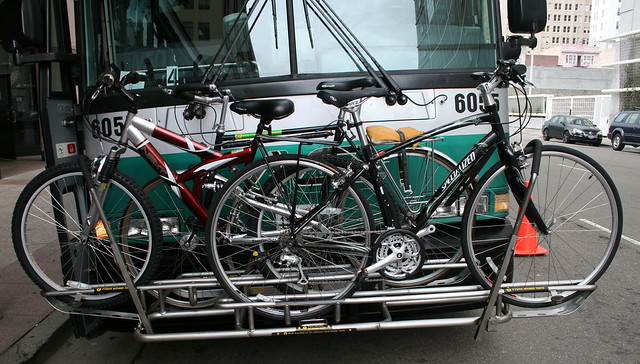 None of these options are perfect.  Bike on Transit was the clearly preferred option in the focus groups, but it has obvious capacity limitations.  A bus that carries 40 people and 3 bikes is easy, but it doesn’t scale up well if a large proportion of transit customers want to use bikes.  Transit agencies that care about being on time are also sensitive to the additional idle time that’s taken up by loading and unloading bikes.

Bike to Transit was generally the second most popular, but it has many of the same limitations in flexibility that the automobile park-n-ride model does.  Transit needs to get you very close to your ultimate destination to be attractive, and on a regional or express route, that’s hard.  It also assumes that you will be ending up back at the station you started from by the end of the day, which limits the possible trips one might take.

Two Bikes solves the proximity problem, but limits the customer to those two transit endpoints, which works okay when the trips are repetitive (work or school) but less so as a generalized transportation model.  It also requires either very secure storage areas or very cheap bikes.  This is the model that’s often used in the Netherlands, with cheap bikes.  It also apparently results in a significant number of orphaned bikes, abandoned at the far end point when that iteration of school or work comes to an end.

Shared Bike schemes have been enabled in the last few years by wireless communications and ubiquitous payment/identity cards, and I think that solving the Last Mile problem is one of their best potential applications.  The national railway of the Netherlands has had success recently with its rapidly expanding OV-Fiets system, aiming to make bike parking less of an issue in the city centers, and to attract additional riders away from driving.  Guangzho in China has also been working to integrate shared bikes with their new bus rapid transit (BRT) system on a massive scale.  Focus group participants weren’t very enthusiastic about this option, in large part because of strong attachment to their own personal bicycles.  I think this is in part a cultural issue though.  I suspect that in Japan or the Netherlands, where being “a cyclist” is less of one’s identity and simple, functional city bikes are much more commoditized, people don’t feel so wedded to their personal machine.  Shared Bike was the most expensive (by a factor of ten!) of the options to implement, per CTU generated. 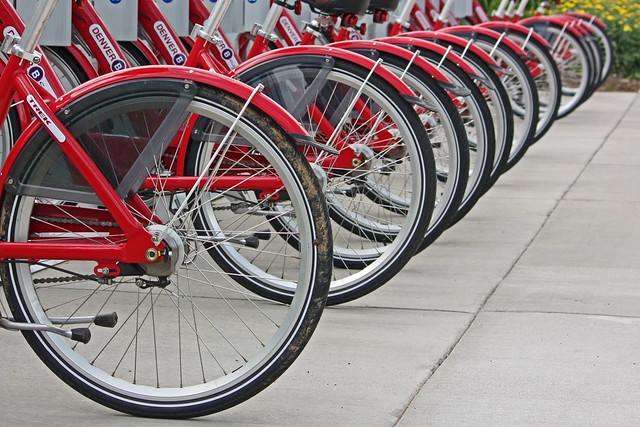 With all of the above options it was noted that if bicycles are to become an integral part of the transit network and a viable mode of transportation more generally, then they must be accommodated in a way that makes them as reliable as the primary alternative that most people will be considering… i.e. driving alone in a private automobile.   This means with Bike on Transit, you can’t have a significant risk of getting bumped for lack of bike capacity.  With Two Bikes, it means that the bike at your destination has to be available (not stolen or vandalized) with high probability.  With Shared Bike, it means there must be sufficient system capacity that users need not worry about arriving and finding the bike share station empty.  Otherwise the bicycles become useful only as incidental or recreational transportation, not as a serious way to get from point A to point B.

In considering potential issues with the above options, and how much it might be worth spending to make them functional, it’s easy to fall into pretending the null alternative — of making no effort to integrate bikes with transit — is cost free.  It is not.  Presuming that the trips are going to be made one way or another, regardless of whether bicycles are part of them, you have to compare the costs of those other modes to the costs of enabling mass bike+transit use.

The subsidy contained in the most common multi-modal US transit use model (the Park-n-Ride) comes largely in the form of a free or cheap parking space.  A parking space in a structure costs around $5/day to provide.  If we have the choice of a transit user driving or biking to the beginning of their trip, all else being equal we would prefer for them to bike, since many more transit users can be accommodated in the same space, it will reduce road congestion in the catchment area, air pollution, etc.  Thus, we should be willing to spend at least the same $5/day subsidizing transit users who bike instead of driving.  We might do this by providing them a discounted monthly transit pass, or by spending money supporting bike share programs instead of building additional parking lots and structures.  No matter how extravagant, and secure a bike parking area you provide, if it’s displacing car parking spaces you would otherwise be providing for free, it’s a spectacularly good value.

One might also look at the cost of providing the frequent, convenient local feeder transit lines that would be needed to generate regional transit users without having them drive or bike to the beginning of their longer-distance journey.  For better or for worse, in most suburban contexts in the US, we’ve decided it’s not worth the money.

The other major alternative of course is that the potential transit user will drive alone, creating road congestion which is expensive in terms of productive time lost to traffic, and also creates pollution.  Or alternatively, creates demand for increased road capacity, which is very expensive to provide, and which is generally socialized.  These drivers also create demand for parking spaces at their destinations, which are expensive, but fabulously underpriced in most of the US with the real costs spread out among everyone, not just drivers. 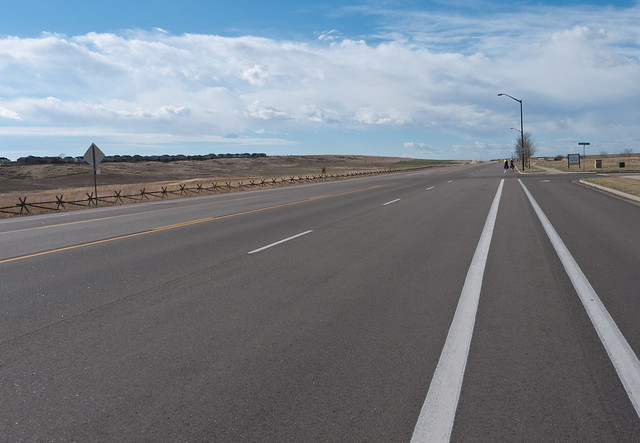 In the end, there’s no reason to think that getting people out of their cars in suburban landscapes that were built especially for cars is going to be easy.  We’re dealing with the aftermath of 60 years of auto-centric land-use patterns predicated on cheap, infinite oil and land.  Which of course don’t exist.  Another recent research paper out of Oregon suggests that given good connectivity and safe infrastructure, people are happy to use bikes for transportation in suburbs, and many parts of the Netherlands have high bicycle mode share despite being essentially suburban in density.  So we need not despair entirely just yet.  But it won’t happen unless we stop subsidizing and mandating patterns of development that consider only motorized transportation, and actively work to retrofit our existing sprawl to be functional for other ways of getting around.

Here’s hoping we get a move on.

A former space explorer, now trapped on Earth. Just trying to make sure we don't blow up our one and only spaceship.
View all posts by Zane Selvans →
This entry was posted in journal and tagged bicycle, lastmile, planning, science, transit, transportation, urban. Bookmark the permalink.

14 Responses to Bicycles, Transit, and the Last Mile